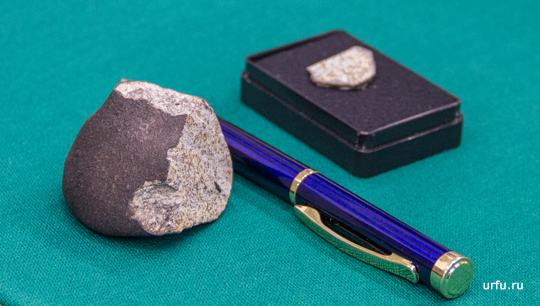 The university holds many meteorite fragments that UrFU scientists are ready to show to their foreign colleagues. Photo: Ilya Safarov

The final decision on the venue of the meeting in 2018 was announced by the Council of the The Meteorical Society in the capital of Morocco: the meeting will be held in Moscow and Ural Federal University will be a co-organizer of the event.

Leading scientists from around the world will gather in Moscow in 2018 in order to discuss the latest scientific results, related to extraterrestrial bodies.

"UrFU will be responsible for the practical part of the meeting. We will conduct excursions to the place of Chelyabinsk meteorite falling and its storage, - says UrFU professor, a member RAS Committee on Meteorites, Victor Grokhovsky. - In the scientific-educational center "Nanomaterials and Nanotechnology" of Ural federal University our colleagues will be able to see samples of other meteorites. "

We would like to remind that the Meeting of The Meteorical Society in Morocco will last until September 14. Russia is represented by seven UrFU scientists: they read the reports and share their invaluable experience with foreign colleagues.