Are there still fragments of meteorites on the bottom of the lake Chebarkul?
More

Are there still fragments of meteorites on the bottom of the lake Chebarkul? 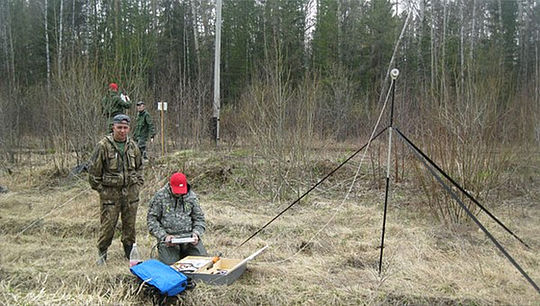 UrFU scientists will record the data obtained through MMPOS magnetometer and will create a magnetic card of a meteorite-crash site. Photo from the personal archives of E. Narkhova

A group of four young scientists of Ural Federal University went to the lake Chebarkul, known as the place of the fall of the largest fragment of the meteorite "Chelyabinsk" weighing 600 kg.

Meteorite fell back in 2013, a huge lump was taken from the lake in 2014, but it is still the possible that the lake contains more fragments of the meteorite.

"We had detected anomalies in this area back in 2013, the year when we created the first high-precision magnetic map of the crash site. This turned out to confirm that a meteorite is indeed on the bottom of the lake. Then it was safely lifted from the bottom of the lake,"- says Evgeny Narkhov, the Researcher of the Quantum Magnetometry Laboratory, postgraduate student of the Institute of Physics and Technology and the head of the expedition.

Studies of magnetic map showed that the anomaly has a complex structure. Such anomaly can be caused by a fragment of the meteorite weighing more than half a ton. Therefore, UrFU scientists have suggested there is another object that just hadn’t been noticed because of the huge amount of silt and a great depth of dive impact. The main objective of the expedition is to see the changes in the magnetic field anomalies after removal of the first fragment by the divers, members of the expedition "Yaz".

UrFU scientists will checked their suggestions after two days of field work: they will record the data obtained on the ground through magnetometer MMPOS, manufactured in Quantum Magnetometry Laboratory (Head of the Laboratory: V. Sapunov),  create a magnetic map, and then back in the university will check the possible presence of fragments on the bottom of the Lake Chebarkul. The scientists will return on Saturday, February 20.