2500 scientists to assemble for 20th Mendeleev Congress in Ekaterinburg
More

2500 scientists to assemble for 20th Mendeleev Congress in Ekaterinburg

Dan Shechtman, Chemistry Nobel Laureate, will speak at the opening ceremony of the Congress 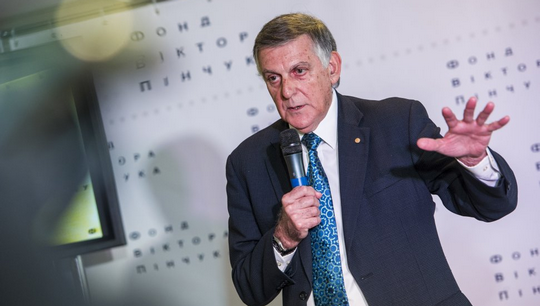 The 20th Mendeleev Congress on General and Applied Chemistry is taking place on September 26 – September 30, 2016 in Ekaterinburg, Russia. Its delegates are going to present the achievements of global and Russian chemical science and discuss today’s most important problems of the field. For several days, Ural Federal University and the “Ekaterinburg-EXPO” International Exhibition Center in Ekaterinburg will turn into discussion platforms for representatives of science and industry determining key areas of development and interaction for modern chemical engineering enterprises.

“The Mendeleev Congress, being one of the most large-scale scientific events, is solving the important problem of popularization of chemistry: Ekaterinburg is visited by the world’s leading scientists, and the Congress itself is preceded by a number of events for school students and teachers.

Ural Federal University is a recognized center of chemical research both in and outside Russia. This was made possible to achieve due to the efforts of the research teams from the university’s Institute of Chemical Engineering and Institute of Natural Sciences, and also due to the creation of the new Chemical and Pharmaceutical Center, which was built within the framework of the Pharma-2020 project.”

The Mendeleev Congress is held once every 4 or 5 years, and Ekaterinburg will be hosting it for the first time. This year’s Congress is going to be very diverse in terms of the membership: more than 30 countries will be represented by their leading researchers specializing in virtually every field of development of the chemical science.

“The ways chemistry influences our lives are numerous, and what the members of the Congress are going to discuss is, in fact, the outlines of the nearest future. What we are doing today in chemical laboratories will tomorrow define the development of the chemical industry, which is one of the most important for the national economy. The Congress will, undoubtedly, promote the development of education, medicine and industries, including the mining industry. Without the scientific basis, it is impossible to develop all these areas. This event is of exceptional importance for the Ural region”.

Valery Charushin,
President of the Ural Division of the Russian Academy of Sciences

The agenda of the Congress covers a wide variety of fields: medical chemistry, oil and gas production, water industry, chemical education and others. The opening ceremony of the 20th Mendeleev Congress is taking place on September 26 in Ekaterinburg, Russia.