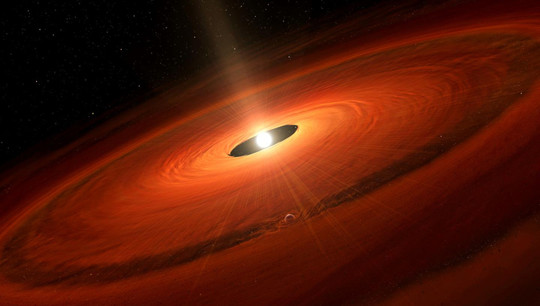 TW Hydra is 176 light years away from us. Photo: scitechdaily.com

The importance of the finding is that the organic acid is much more difficult to obtain than other organic molecules found in protoplanetary discs before. If methanol is obtained from carbon monoxide on the surface of dust particles under stellar radiation, then formic acid requires more complex reactions, which are not possible without active processes of organic synthesis.

Thus, the discovery may indicate an active process of organic synthesis long before the formation of the planets. This means that immediately after the appearance of celestial bodies, large amounts of organic compounds must already be present in their primary material. The results are extremely important for understanding the specific conditions under which the emergence of life takes place at an early stage in the development of planetary systems. It is known that formic acid is the basis for the synthesis of more complex carboxylic acids actively used by earth life.

We would like to note that the observation of the protoplanetary disk of the young orange dwarf TW Hydra located 176 light years from the Earth was conducted by the ALMA radio telescope (Atacama Desert in Chile). The age of the star is about 10 million years, so a protoplanetary disk and one massive Jupiter-like planet have formed around it, but an Earth-type planet has not yet formed. This gives a very rare opportunity to look into the era of the formation of solid earth-like planets, like our own, especially since the orange dwarfs are relatively close in weight and spectrum to the yellow ones, to which our Sun belongs.

The results of the study are published in The Astrophysical Journal Letters.