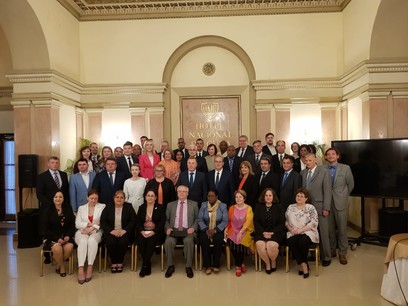 Photo credit: V Forum of Rectors of Universities of the Russian Federation and the Republic of Cuba

Ural Federal University aims to establish a systematic cooperation with the leading universities of Cuba. The V Forum of Rectors of Universities of the Russian Federation and the Republic of Cuba has become the driving force of that work, as the Russian Union of Rectors took part in the forum. Rector Victor Koksharov was the head of the delegation from Russia. The main goal of the visit was to develop partnerships with the leading universities in Cuba in the new decade. From the Russian side, rectors and representatives from 17 universities took part in the forum.

In his address to the Cuban and Russian colleagues, Rector of UrFU presented the higher education system of Russia, described its dynamic of development, and listed promising areas of cooperation with Cuba and Latin America as a whole.

“For the Ural Federal University, the forum has become an important part of systematic work for establishing cooperation with Latin American universities,” said Victor Koksharov. – “We are interested in such cooperation, as we see very good potential in it, despite the fact that we are located far away from each other. UrFU as one of the leading universities in Russia is ready to overcome distances between countries and to establish effective academic partnership.”

The cooperation focuses on academic mobility, scientific collaboration, and mutual support in the frameworks of network partnerships with the five leading universities of Cuba.