The research, when finished, could improve diagnostics and treatment of malignant tumors 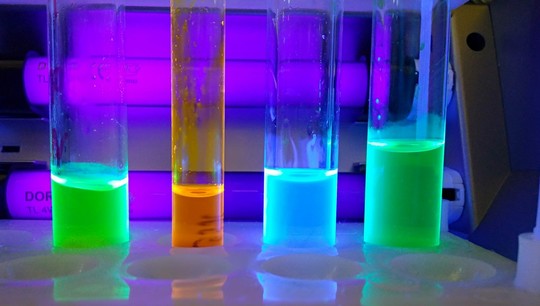 The project was supported by the Russian Science Foundation. Photo by Natalia Belskaya.

Scientists of the Ural Federal University are working on a project of the targeted drugs delivery for the diagnosis and treatment of malignant tumors. To make this process more efficient, it is planned to develop new luminescent molecular carriers and organic fluorescent nanosized particles. The project was supported by the Russian Science Foundation, which allocated a three-year grant in the amount of 4 to 6 million rubles per year.

“Fluorescence is the absorption of a quantum of light by a substance, followed by the emission of another quantum that has properties that are different from the original. This is a bewitching phenomenon that we encountered in our research,” explains Natalia Belskaya, project manager, professor of UrFU. - We are actively studying the physics of this phenomenon, mastering the methods of its study and prospects for use. And substances with such unique photophysical properties are of great interest due to a wide range of applications, for example, as biomolecular labels or probes for research in biology, medical diagnostics. In addition, it is an important component of modern methods of treatment of socially significant diseases, which, in the first place, include malignant tumors."

Photoactive substances are also necessary for the development of organic photonics, the creation of luminescent (LEDs and displays, luminescent qualitative and quantitative analysis, luminescent probes and tags) and photovoltaic devices (photodetectors, color-sensitized solar cells) - all these technical areas of using fluorophores strongly dictate the need for search and research new substances with specific optical properties.

“Targeted delivery involves a delviery of a biomolecule, or a diagnostic molecule or a sensor and is followed by its release from this complex system at a predetermined time. The case is suitable for studying the biological system or treating pathologies in medicine - notes Natalia Belskaya. - And light radiation is one of the attractive external influences (stimuli) that initiates the release of a biomolecule or drug. Why exactly we need light radiation? Because it is not invasive, its effect can be carried out with high spatial and temporal accuracy, its action may be easily reproduced using various devices, its intensity can be easily controlled.”

When biologists implement such a targeted photo-delivery the toughest thing is choosing a phototrigger (fluorophore) compound and the process of releasing a drug or diagnostic molecule from a photo courier using remote photo-irradiation. A feature of their upcoming studies is the use of original effective fluorophores synthesized over the past years in the university’s laboratory. The photophysical properties of these organic fluorophores, and for some of them the behavior in biological media (cytotoxicity, penetration into the cell and cellular organelles, the possibility of using flow cytometry), have already been studied.

“We think that we have an actual and very interesting study ahead of us, which will allow us to obtain new complex organic hybrid systems with unique photophysical properties, to study the possibility of occurrence and features of the manifestation of optical phenomena for various organic structures, to determine the features of the behavior of these molecules in biological media, their physiochemical properties. And most importantly, it opens the way to such areas of development of medicine that are most important in our time, such as personalized medicine and the creation of smart drugs,” assures Belskaya.