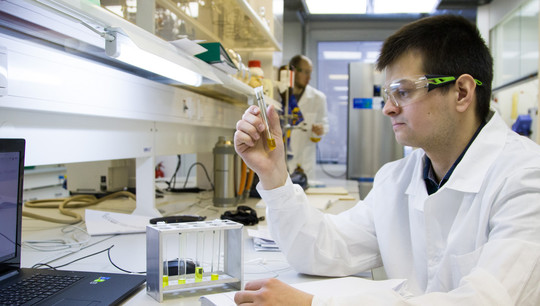 Over the year, the university rose up 33 positions in the prestigious rating. Photo: Ilya Safarov.

The Ural Federal University rose for the year immediately to 33 lines of the prestigious QS World University Rankings. According to the data published today, UrFU took 331th place in the world, strengthening the indicators of academic reputation and internationalization.

“The growth in the fresh QS ranking is the result of the university’s consistent work over several years, its participation in the 5-100 international competitiveness program. We see a noticeable increase in academic reputation - by 75 positions compared to last year. In addition, the success in the ranking was also affected by an increase of 58 positions in terms of the proportion of foreign students,” said the rector of UrFU Victor Koksharov.

The rating results confirm the university’s major achievements in the field of cooperation between science and education with global Russian companies that form the technological needs of users in various regions of the country, says Dmitry Pumpyansky, Chairman of the Ural Federal University Supervisory Board.

“I especially want to note the focus of our scientists and teachers on international cooperation, in particular, on projects of the Ural Interregional Research and Education Center of a world level,” Pumpyansky emphasized. “I am sure that the creation and development of the REC will significantly increase the visibility and competitiveness of the university on a global scale.”

Recall that the Ural REC “Advanced Manufacturing Technologies and Materials” was created in 2019 to combine the research potential of the Sverdlovsk, Chelyabinsk and Kurgan regions. Today, REC includes 78 organizations of science, education and the real sector of the economy, and in May 2020, the center’s supervisory board was formed.

According to Dr. Vladimir Kruzhaev, First Deputy Vice-Rector for Science at UrFU, the university is advancing on the world stage thanks to joint research with leading foreign scientists, the organization of major international scientific events and the participation of university scientists in major events in other countries.

“In the new reality, the remote interaction of our scientists and teachers with colleagues and students from other countries comes to the fore. Many international events in the scientific and educational fields are now changing their format. Those who are better able to adapt will achieve better results,” Dr. V. Kruzhayev shared his opinion.

In the spring of 2020, the Ural Federal University showed an increase in QS World University Rankings by Subject subject ratings. Thus, the university is in the group of 101–150 in philosophy, 151–200 in archeology, 201–250 in mathematics, and is among the 300 best universities in the world in linguistics, and the top 400 in materials science.

The QS ranking of world universities has been published since 2004. Educational institutions are evaluated by their academic reputation, demand among employers, the ratio of the number of students and teachers, citation of scientists, as well as the number of foreign students and teachers. 1604 universities of the world took part in the new study, of which 28 were Russian.