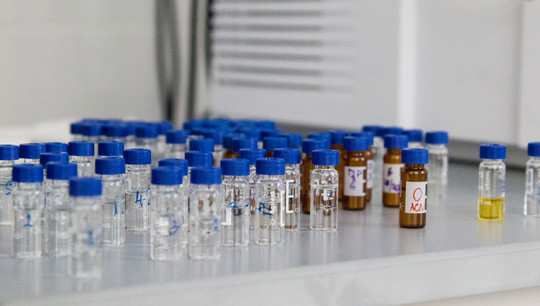 Scientists have attached lutetium-177 to two agents that deliver the radionuclide to the tumor. Photo: Karina Golovanova.

Physicists from the Ural Federal University, the Ural Branch of the Russian Academy of Sciences, together with colleagues from the Al-Azhar and Miniya Universities (Egypt), analyzed the effect of a promising radionuclide for cancer therapy - lutetium-177 (177Lu). To do this, they built biokinetic models of the behavior of radionuclides in the body and calculated what doses metastases, as well as other organs and tissues, would receive. To build the models, scientists used data from many clinical and laboratory studies published in the world scientific literature.

The analysis results are presented in the International Journal of Radiation Biology.

According to the researcher of the Department of Experimental Physics of UrFU, Hesham Mahmoud Hamed Mohamed, most of the known malignant tumors form metastases that are located in different parts of the skeleton. They deliver constant pain to the patient and significantly limit his activity, therefore, the primary therapeutic task is to relieve pain with a radiopharmaceutical. But the problem is that the drug affects not only the tumor and metastases, but also the neighboring organs and tissues.

“We needed to analyze what doses other organs would receive, except for the one that is the main target. For diagnostic drugs, this is not so critical, because the doses are small. And in therapy, a very large dose is applied to a tumor, and if the drug, in addition to the tumor, accumulates somewhere else, this may have negative consequences for the patient, ”explains Mikhail Zhukovsky, director of the Institute of Industrial Ecology of the Ural Branch of the Russian Academy of Sciences, professor of the Department of Experimental Physics of the Ural Federal University.

Scientists have found that preparations with the addition of lutetium-177 are more effective than analogues. For example, strontium-89, which has been used in therapy for many years, is relatively long-lived. Its half-life is 50.5 days. This time it is in the bones and additionally irradiates the red bone marrow, which is located nearby.

“If you need to get a large dose quickly, you have to inject a lot of the drug, and then this dose is too much for the patient. But if you introduce the drug gradually and wait until the required volume has accumulated, then it may take several weeks, which is also bad for the patient. And lutetium is short-lived, with a half-life of 6.73 days. Therefore, the dose is implemented quickly enough, ”says Mikhail Zhukovsky.

During the research, physicists studied two agents, methylene diphosphonate (MDP) and ethylenediamine tetramethylene phosphate (EDTMP), which deliver the radionuclide to the focus. Lu177 was "attached" to them. Both preparations contain phosphorus, which ensures a high cell response (tropism) in the bone tissue. For them, scientists were the first in the world to create biokinetic models of the impact on the human body (experimental data were obtained on mice in 2008). The absorbed doses were determined for the kidneys, red bone marrow, liver, spleen, and bone surfaces.

"Analysis of published experimental data showed that 177Lu-EDTMP is more favorable for radionuclide therapy than other drugs, because it is more targeted - the tumor receives more dose than organs," explains Hesham Mahmoud Hamed Mohamed. “In addition, despite the fact that drugs with the addition of lutetium caused a slight depression of bone marrow function, no patient had any negative effects requiring intervention.”

According to scientists, the data published in the journal should be enough to continue the work on the development of radiopharmaceuticals with 177Lu. It is also possible to produce such drugs in the Urals, since lutetium-177 is produced here (although for the time being for supplies abroad).

“Despite the fact that lutetium has convenient parameters and is becoming popular in the world, it is not yet used in our pharmacopoeia. It is theoretically possible to create a base of radiopharmaceuticals based on our own. Since we produce lutetium, there is no need to purchase it. In addition, there is a powerful school of nuclear medicine in Chelyabinsk. There are enough specialists in the field of radiochemistry in the same "Mayak". UrFU has a Department of Radiochemistry, ”states Mikhail Zhukovsky.