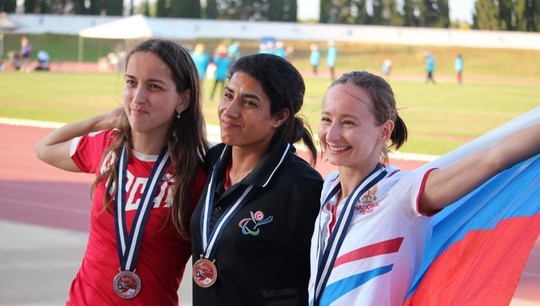 Elena Tretiakova (pictured on the right) plans to take part in the Paris competitions in 2024. Photo from Elena Tretyakova's archive.

Elena Tretiakova, a postgraduate student of the Ural Federal University Institute of Physical Culture, Sports and Youth Policy, International Master of Sports in athletics, took part in the Paralympic Summer Games in Tokyo. She took the sixth place in 400 meters distance.

It took about six months to prepare for an event of this level, including participation in qualifying competitions at the Russian Championship.

"What were my emotions? Probably joy, because it was the main start of the four years, which was postponed for a year. And as an athlete I invested as much as possible to deserve this trip," said Elena.

Tokyo 2020 Paralympics is the debut for Elena Tretiakova. The athlete plans to take part in the Paris competitions in 2024 and is not going to stop there.