Scientists Get Closer to Creating an Efficient Solid-State Lithium Battery

Its advantages are greater energy capacity, cost-effectiveness, and safety 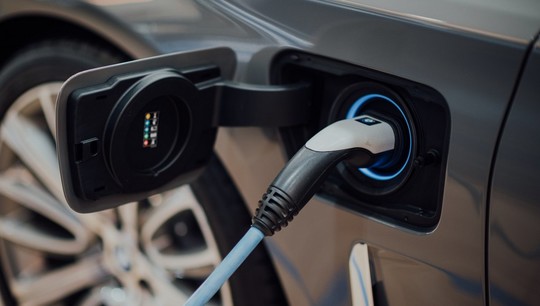 With improved batteries, electric cars will be able to travel long distances on a single charge. Photo: Unsplash.com / Chuttersnap.

Scientists from the Institute of High-Temperature Electrochemistry of the Ural Branch of the Russian Academy of Sciences (IHTE UB RAS) and Ural Federal University have for the first time experimentally determined the optimal thickness of the aluminum layer between the lithium anode and the solid electrolyte. The Ural scientists' research brought the prospect of a fully solid-state lithium power source closer. An article about the work was published in the journal Solid State Ionics.

The results will be used to create high-energy fully solid-state lithium power supplies. Their advantage over explosive batteries with liquid electrolyte is increased operational safety. In addition, solid-state batteries have a relatively low production cost, a shorter charging period, high energy density (energy storage capacity), lower self-discharge losses and therefore a longer service life, compactness and lightness, safety and environmental friendliness. The most promising area of application of fully solid-state batteries is the electric car industry. Electric cars will be able to travel long distances on a single charge.

The effect is enhanced if a layer of aluminum is applied to a lithium anode heated to the lithium melting point - over 180 °C (heating takes place in a stream of argon, since in air lithium oxidizes and degrades very quickly). When aluminum is applied to the molten lithium, the area and density of contact between the anode and the electrolyte increase, the interface resistance and, consequently, the risk of degradation of the system elements decreases, and its current-conducting characteristics are noticeably improved.

"Our task was to establish the optimum thickness of the aluminum layer. By vacuum deposition, samples of ceramics (i.e., solid electrolyte) were uniformly coated with layers of aluminum of different thicknesses - 10, 50, and 150 nanometers. The Ural Federal University measurements showed that 150 nanometers aluminum deposition provides a denser contact between the anode and the electrolyte and leads to a more rapid formation of a stable interface between them, both at room temperature and at elevated temperature," says Evgeniya Ilyina, senior researcher at the Laboratory of Chemical Sources of the Institute of High Technologies of the Ural Branch of the Russian Academy of Sciences.

It is fundamentally important that the use of aluminum does not lead to the formation of poorly conductive impurity phases that can impair the performance of the system, the scientists say.

"Maximum efficiency is achieved in a few days, when, under the influence of current and heating, aluminum completely transforms into molten lithium, and instead of a lithium anode and aluminum layer, a lithium alloy with very little aluminum content is formed, directly contacting the electrolyte," specifies Viktoria Pryakhina, a researcher from the Department of Optoelectronics and Semiconductor Technology of the UrFU Research Institute of Physics and Applied Mathematics.

Some of the research conducted at the UrFU was performed using equipment from the Modern Nanotechnologies Ural Center for Collective Use.

This work was carried out as part of the second stage of research under a grant from the President of the Russian Federation (research project No MK-1382.2019.3.). At the first stage the research team successfully developed a solid electrolyte with a cubic lithium-lanthanum-zirconium-oxygen structure, alloyed with niobium and aluminum. It was this electrolyte, which features high density (about 98%) and lithium-ion conductivity, as well as stability in contact with lithium metal, that was used in the second stage of research.