Its effectiveness was proved in clinical trials 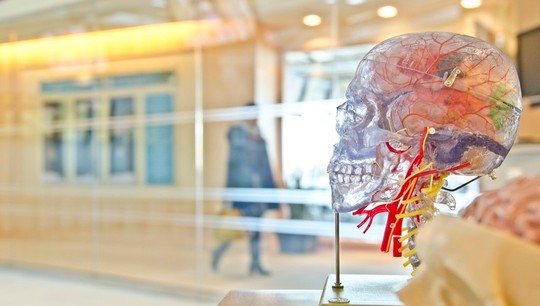 A team of scientists of Ural Federal University headed by Prof. Vladimir Kublanov created a hardware-information system for brain disorders prophylaxis and treatment unrivaled both in Russia and throughout the world. The system developers published the article describing the system in the journal Mobile Information Systems (UK).

According to the World Health Organization, brain disorders (mainly strokes) are amongst the main mortality factors in the world.

‘Clinical trials of the system created by UrFU scientists in Ekaterinburg and Moscow confirmed its effectiveness (which is higher compared to other treatment modes) in rehabilitation of patients suffering from the consequences of strokes, brain injuries, brain damage as a result of toxic or alcohol poisonings, neuroinfections, atrophic diseases of the brain such as Alzheimer's, Parkinson's, Pick’s, Huntington’s diseases,’ says Timur Petrenko, Associate Professor at the Ural State Medical University’s Department of Psychiatry.

The system consists of two blocks: neuro-electrostimulation device and a smartphone. The device includes two multielement electrodes which are attached to the neck, the area that comprises such centers of segmental control for vital functions as glossopharyngeal, accessory, vagus nerves and their branches, cervical plexus of the spinal nerves, carotid plexus, nodes of the sympathetic trunk formed by the nervous processes of the autonomic nuclei of the spinal cord.

The device is monitored controlled by the doctor via a smartphone or a tablet with a special Android/iOS/Windows Phone application, and the two blocks exchange information through Android Bluetooth Low Energy API.

‘Telemedicine is mainly aimed at the follow-up of patients, general state of health monitoring, counselling. We went further and suggested treatment under continual care of a doctor. Unlike pharmacological therapy, this method is “targeted”, which assumes no negative side effects on the entire body,’ Mikhail Babich, one of the developers, says. ‘Our system is convenient in that it allows a patient to go through rehabilitation in the comfort of their own home. A doctor, on the other hand, is able to control the system remotely, in real time, and monitor up to 10 patients in such a way, both at rest and during exercise (like running on a treadmill or riding a stationary bicycle). Significantly, the system is compact, mobile, easy to operate, has small weight and considerable duration of autonomous operation – minimum of 24 hours.’

The information about the patient's condition is transmitted by the attending physician from their smartphone to the server of the medical institution. This ensures the protection of patients' personal data and excludes unauthorized and unprofessional interpretation of the indications of the neurostimulating device, while the doctor receives a database of accumulated data which is used when making diagnoses, choosing treatment, correcting or discontinuing it.

'Artificial intelligence does not replace the doctor but supports them in making decisions. Biomedical signals received via Bluetooth from the device are processed using the algorithms developed by us. Artificial intelligence recognizes certain patterns, and the doctor receives clear, consistent information: whether the patient is healthy or sick, and if they are sick, what the dynamics is compared with previous indicators. The processes of diagnosis and choosing the trajectory of treatment are significantly accelerated,' explains the system’s co-author Anton Dolganov.

Now the developers are looking for partners for the commercialization of the successfully tested system.